Thank you for joining us in celebrating our 10th anniversary – it’s now 10 years ago when a group of entrepreneurial people put their heads together and decided to establish the Danish-Estonian Chamber of Commerce as a non-profit organization. We can take an even longer retrospective view since it all started back in 1996, when the Danish Ambassador Svend Roed Nielsen, supported the idea of starting a tradition for the Danish and Estonian businessmen to meet up at the Danish-Estonian Business Club.

At that time, the idea was to connect Danish-Estonian businesses and establish relationship cross the borders – and that is still the key value of our chamber today. Past 10 years, we have developed our chamber in cooperation with the Danish Embassy. Former ambassadors Kirsten Geelan leaded the road followed by ambassador Uffe A. Balslev, and the ambassador Søren Kelstrup. We now like to welcome the new ambassador, Mrs.  Kristina Miskowiak Beckvard and look forward to a continued close cooperation in promoting and developing the businesses between Denmark & Estonia. We are on that path together.

This 10th year’s anniversary would not have happened, without the active members of the council. Therefore, I’d like to thank all contributors coming with ideas, personal energy and support for the chamber’s development throughout the years. I would like to mention the names of all the council members but realized that 24 motivated persons have engaged themselves as council members through the past 10 years. Therefore, let me just point out our great gratitude to Jens Christiansen being the chairman 2007-2015 and Marco Iovino 2015-2017 – your devotion is highly appreciated. Also, special gratitude to the chamber managers – starting with Kersti A. Andersen, followed by Lidia Jurri in 2007, who drastically was taken away from us in a way too early age. And Merli Lindberg, who has been our anchor since 2009 – thank you for the great effort and energy!

I would also like to thank our members for creating the core of the Danish-Estonian Chamber of Commerce community and being the raison d'être, the reason for the existence.

A milestone has been reached - many achievements through numerous events with the purpose of building bridges between our two countries, people, and cultures that are very much alike. Our history together goes at least 800 years back. Dannebrog, the Danish Flag’s 800 years that we proudly will celebrate in Tallinn in 2019.

As the last thing, I urge all members to feel free and join the council meetings from time to time for discussions, suggestions or else. The door is always open.

Let us celebrate the 10th and many more anniversaries to come!

Your Sincerely,
Terje Henriksen
Chairman of the Council
Danish Estonian Chamber of Commerce 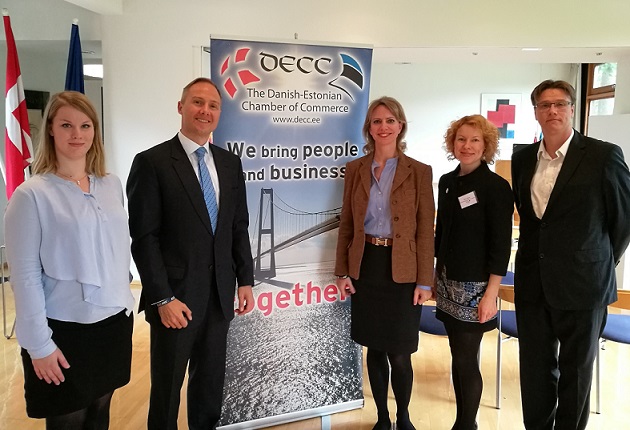